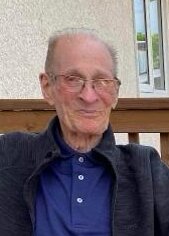 Louis was born March 8, 1939 and lived in Ste. Anne, MB., where he raised his family along with Edmonde. Louis drove truck all his life and loved it. He worked at Petit Transfer in Ile Des Chênes, MB., owned and operated his own gravel truck, and ended his career working for Bernie Vermette.

Louis spent a lot of time at the arena, first watching his sons play hockey, and then watching his grandchildren. Pépère always had a pocket full of loonies and we knew we’d always get a loonie after each game, plus another loonie for each goal we scored. He even had the privilege of watching a few of his great-grandchildren play a few times, and the loonie tradition continued.

Cremation has taken place. A private family service and interment will take place at a later date.

The family wishes to thank Claudette for all you’ve done for dad/pépère over the years.