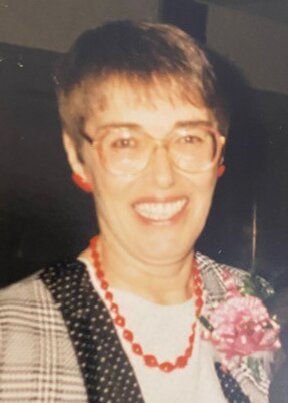 It is with great sadness that we announce the passing of Elaine James, 83, of Winnipeg. She passed away peacefully on Wednesday, September 28, 2022, at the Grace Hospital, Winnipeg, MB.

She will be fondly remembered by sister Valdine Corrin; nephews Blair Corrin (Darlene), Brad Corrin (Elizabeth), and Steve Douglas. She will also be dearly missed by her sister-in-law Ruby Ingram and nephew Rod Ingram; niece Shelley (Dwayne) Hopper; and nephew Mark Hungerford (Martha), not to mention several great, and great-great-nieces and nephews from Toronto, Barrie, Saskatoon, and Newfoundland. In addition to so many friends she met over her lifetime, she will be sadly missed by her former neighbours Karen and Colette who looked out for “the girls” at every turn until it was time to move from Bruce Avenue, where they enjoyed many laughs in either of their backyards, garage or front lawn with a glass of wine in hand.

Elaine grew up in the Weston area and attended both Cecil Rhodes Junior High and Tec-Voc High School where she graduated in 1957. Elaine excelled in her studies and was not only gifted academically, she was an all-star athlete in a wide array of sports ranging from track and field, basketball, baseball, volleyball and of course curling. Directly out of high school, Elaine acquired her first and only job at Richardson Greenshields of Canada where she worked for 40 years of exemplary service until her retirement in 1997. She loved her job and enjoyed socializing at the yearly Richardson’s barbeques and Christmas parties where she reminisced with many of her friends she met over her career.

In her adult life she curled with various teams competitively and was a Provincial Women’s Curling Champion in 1981 at the Manitoba Lassie (MacDonald Tobacco Company) Championship. She won three Senior Women’s Championships in 1990, 1992 and 1993 along with her long-time team members Joan Ingram, Dot Rose, Laurie Bradawaski, and Diane Hungerford. She was also second on the team who won the inaugural Manitoba Masters Women’s Championships in the year 2000. Elaine’s love of sport didn’t end there, as she won multiple tournaments in golf at the Rossmere and CFB golf courses, curling bonspiels at the Charleswood Legion with various teams, and she was also a force to be reckoned with in horse shoes at the local Charleswood Legion.

The family wishes to thank Holy Family Nursing Home for the exceptional care she received the past few years from her nurses, nurse’s aides, and recreation coordinators who loved her participation. We also would like to thank the nurses and doctors at the Grace Hospital for the compassionate care Elaine received in her final days. We also wish to thank Birchwood Funeral Chapel for their great care and compassion of Elaine and also to Chapel Lawn Funeral Home for taking care of Elaine’s final wishes to be laid to rest alongside her parents.

The Celebration of Life will take place on Saturday, November 5, 2022, from 2:00 p.m. to 4:00 p.m. at the Sturgeon Heights Community Centre, 210 Rita Street, Winnipeg, MB. A light lunch and refreshments will be served.

Donations can be made to a charity of your choice in her memory if you wish.