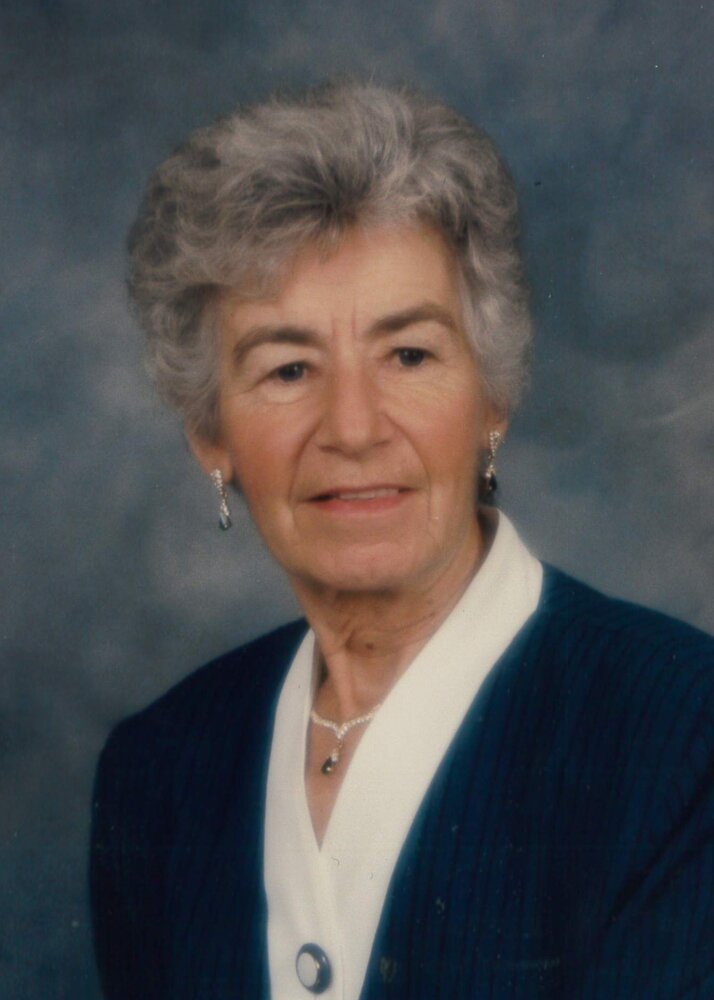 Betty (Elizabeth) Neufeld was born May 22, 1932 in the R.M. of Morton, Manitoba, to Peter Kornelius Neufeld and Agatha Lohrenz Neufeld. Upon the death of her mother, PK married Margaret, who became Mom to the family. Betty was predeceased by her husband Henry Engbrecht, and daughter-in-law Dianne Engbrecht. She leaves to mourn her children Patricia (Victor), Dan (Mavis), and Marc (Pam), their families; and her siblings Sarah Shail, Jo Nicol, and Jake Neufeld.

Betty, better known as Bets to her five siblings, was raised on a farm seven miles outside of Boissevain. She went to Strathallan School by horse and buggy in spring and fall, and horse drawn sleigh in winter. Betty excelled academically, attended Gretna MCI for Grade 11, accepted Jesus as her personal Saviour while there, then finished Grade 12 by correspondence at home.

Mom stooked grain, churned butter, milked cows, baked, and continued baking bread well into her 80’s. She was an athlete; she played 1st base on the boys’ softball team and boasted about being a 500 hitter while the other girls played hopscotch and drop the hanky! After Grade 12 she worked at the Royal Bank in town. She sang in the church choir and continued attending and participating in Church for the rest of her life. Her brother Pete introduced her to his good friend Henry, who became her husband July 11, 1953. Together they shot archery, curled, started swimming lessons when Patti and Dan started lessons, and she enjoyed swimming till her early 80’s. Henry introduced her to downhill skiing in their 40’s which became a family sport, and she took her last run when she was 60. Early in their marriage she co-owned a women’s clothing store with Henry’s twin sister, Lena Martens. Mom taught Kindergarten out of her home, was an accomplished seamstress, bookkeeper, and stenographer. Throughout their marriage she and Henry supported Patti, Dan, and Marc in their passions of music, sports, and travel along side the values of faith and family. Following Henry’s death she started a journey of volunteering for MCC which took her to Pennsylvania, Ontario and here in Steinbach.

When Patti moved out west, Mom made BC her vacation destination twice a year to spend time with her young grandchildren Rebecca, Pierce, and Nikolas. When Dan & Dianne worked at Camp Arnes she would spend time with Kyle at the beach. She enjoyed working in any capacity with Dan and Dianne’s catering company, and loved their annual vacations at Andy Lake where she would roommate with Goldie. Following Dianne’s passing, Betty was delighted to welcome Mavis and her children (Darcey, Daylon, Dustin, Denny, & Tanya) and their families, to the Engbrecht fold. Mom was there for each of us when we needed her, so it came as no surprise when she devoted five years to Marc’s young children Brandyn, Kayla, and Courtney. After Pam joined the family and Tori and Reegan came along, she happily attended Tori’s dance recitals and Reegan’s soccer games. As the family grew she continued to pray for her children, grandchildren, and great grandchildren.

At 82 she moved from Pine Crescent which had been the family home since Christmas 1969, to Fernwood where she resided till her death on Friday, September 30, 2022. While in residence there she was surrounded by old and new friends. Mom and her sister Sarah, lunched together daily, which was a blessing to both. She loved playing Scrabble, Uno, and SkipBo, and the family pizza parties were a highlight. To summarize Mom, one could say, she lived her life with spunk, determination in good and bad times, worked hard, exemplified her faith in Jesus, as a wife, mother, grandmother, great-grandmother, Oma and GG; a matriarch during 35 years of widowhood, and 90 years that God gave her, as a gift to us left behind.

The funeral service will be held on Wednesday, October 12, 2022, at 2:00 p.m. at the Steinbach Mennonite Brethren Church, Steinbach, MB., with a viewing at the church prior to the service. Burial to follow at Memorial Cemetery, Steinbach, MB.

Donations in memory of Betty may be made to ShareWord Global Canada (formerly known as Gideon's International).