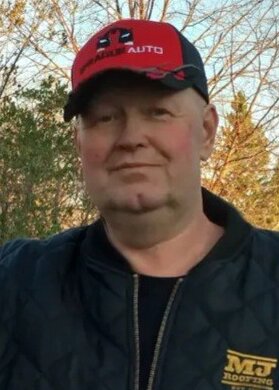 It is our deepest sorrow that we announce the passing of our brother, Mark Lyndon Janz, on Saturday, October 8, 2022, at the age of 61. He was called home to be with his Lord and Saviour, and his loved ones that have gone before – his mother Kathrine, his father Alfred, and brother Johnny who passed in infancy.

Mark was born in Winnipeg on August 8, 1961, the eldest child of Alfred and Kathrine Janz, and lived his first four years in a small house in Brooklands. They later moved to Fairmont Road in Charleswood, which in those days was on the southwest edge of the city, and it was there where his love for the outdoors began. He enjoyed nature and brought several wild animals home to nurture and care for them. One was a great horned owlet that had fallen out of its nest. Mark took it upon himself to raise it with a diet of beef liver, etc. At the age of 14, his family moved to Middlebro, MB, where he finished High School. He enjoyed many outdoor activities such as fishing, hunting, and trapping. He also loved to read. He started work at the ESSO service station in Sprague after graduation and worked there many years as a largely self-taught mechanic, before opening his own service garage where he sold and serviced vehicles in the community.

Mark’s health began to deteriorate slowly at a relatively early stage in his life. Mark had a personal relationship with his Maker as his Saviour and Lord, and it shone through as his health declined. He eventually left the Sprague area about five years ago, and moved to Winnipeg, as he became dependant on hospital care for dialysis three times a week.

The funeral service will be held on Saturday, October 22, 2022, at 2:00 p.m. at the Sprague Community Hall, Sprague, MB, with a viewing prior to the service from 12:30 p.m. to 1:30 p.m. Burial to follow at Golden Branch Cemetery (formerly Full Gospel Mission Cemetery), north of Sprague.

Donations may be made to the Canada Kidney Foundation – Manitoba Branch.