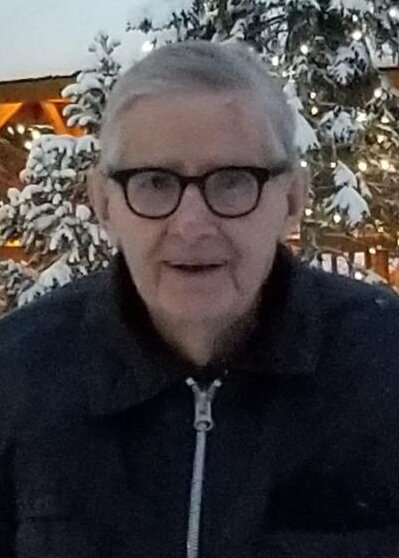 It is with mixed emotions that we announce the passing of Henry Kehler. We are happy for him because it was the desire of his heart to go to be with Jesus for awhile already.

Henry was born at home on October 24, 1931, to Henry S. and Agatha Kehler. He had an interesting life, probably unusual to many people. He never married but looked after his parents as long as was necessary.

Henry is survived by his sisters Tina and Betty and her husband Ben Friesen, sisters-in-law Agnes Kehler and Carol Kehler. He is also survived by numerous nephews, nieces and other family members.

Henry was predeceased by the following: brother Cornelius, brother Jacob and wife Anne, brother Peter (Jim), sister Mary and her husband Roy Broesky, brother-in-law Peter Neufeld. He was also predeceased by many nephews and nieces and other family members.

Henry was born at home in Mitchell and grew up in the area. On August 10, 1959, when Henry was 27 years old, he had a tragic construction accident which he survived. On August 10, 1959, Henry was working on building the Barkman Concrete plant, and you must remember here that this was considered a bit out of town. One night he forgot his jacket in the trench and decided to go back for it. At 8:15PM, a motorist drove by and saw Henry drive into the yard. The trench where Henry had been working was quite deep, like probably 18 or 20 feet. They were getting ready to pour concrete and so of course, there was rebar. One of the sizable rods was sticking straight up, probably 6 – 8 feet. Suddenly Henry slipped and fell and impaled himself through his lower torso and hung on the rebar. Then at 8:20PM, A Steinbach businessman was driving by and decided to check out the progress on the site. When he approached the trench, he heard Henry’s cries for help. He remained with Henry while his wife went for help. The doctors gave Henry ether and other sedatives as soon as they got there but it took about ½ hour before they got him off the rod. Despite all the sedatives, Henry was conscious and answered all their questions calmly, including on the way to the Bethesda Hospital. From there the ambulance took him to St. Boniface Hospital for surgery to repair all the damages. When you think of the trauma and injury Henry suffered, it’s amazing that he not only survived but that he actually thrived and had very little issues as a result. Before he died, he was on non prescription Senekot and Extra Strength Tylenol.

For many years Henry worked at Loewen Windows. He was a faithful employee there. He enjoyed cars and had quite a few.

He was a loyal church member at Mitchell CMC church for many years and after his travel was limited, he still said this was his church.

The funeral service will be held on Monday, November 28, 2022, at 2:00 p.m. at Birchwood Funeral Chapel, Steinbach, MB, with viewing one hour prior to the service. To join the family via livestream please click HERE shortly before the time of the service.

We as the family would like to thank the staff of Resthaven and Cedarwood for their compassionate care and support for Henry over years. It was very evident to us that you cared deeply for Henry. Thank you!

We as family thank all of you who have loved and supported Henry on his journey, whether it was earlier in his life or later.

We pray God’s blessing on you for your support.