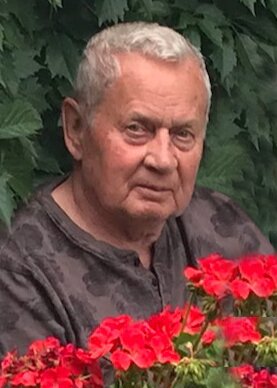 A memorial service will be held on Friday, December 9, 2022, at 11:00 a.m. at Steinbach Mennonite Church, 345 Loewen Blvd, Steinbach, MB R5G 0L1. To join the family via livestream, please click HERE shortly before the start of the service.

I was born in 1938 when our family lived in Grunthal, where my dad was postmaster. We had some kind of medical contract with Concordia Hospital in Winnipeg, and that was where I was born.

Because my dad had to provide room for the post office in our house, we children become used to having people come to our door, especially after hours.

For some time we also had the telephone exchange in our home. This was comprised of three phones that were mounted on the wall. They were the hand-crank models and it was always noisy with people using the party lines in those days.

In 1945 we built a new house on Main Street right beside the old one. Dad had bought three acres on Main Street from uncle Abe Krahn for $15 per acre. I started school in 1945 in the building right across the street from our house, and it is still there today, the New Horizon club.

For the first four years of school, I could walk across the street for lunch, for mom‘s good homestyle cooking. When the new school was built on Park Street, in 1950, I attended there till I graduated.

At this point in my life girls were of a little interest to me. But at a wedding reception in 1958 I met someone that I had not met before and my interest changed immediately. Her name was Sylvia Friesen and she lived south of Grunthal at the time.

I graduated in 1957 and continued on in University for a year while working Canada Packers nights. Sylvia came to Winnipeg too, and worked at the Misery and McMahons. I remember the first night Sylvia came to Winnipeg to work. We had a BLT at a rest on the corner of Notre Dame, and McGee. Eating a toasted sandwich was a bit noisy, and I know we were both embarrassed, but things developed from there. We are now totally used to the noises we make when eating. I won’t relate all the places where I worked before we got married, but I was working in Grunthal when we tied the knot. Shortly after that, I started working for my father-in-law at Friesen lumber. I was there for 11 years, when I started as manager at Grunthal credit union on January 3, 1973. From there I went to work at CT Loewen’s in September 1981 and stay there till I retired on December 3, 2003.

In all these years with Sylvia employed as an RN, both in Winnipeg and later here in Steinbach, we managed to raise three beautiful children while both working.

We have lived at nine different places in our marriage.

In 1974 we bought an old building in St. Malo that had been a library as well as a Credit Union at one time. We moved it to an Acreage on the 205 and did major remodelling on it.

Anyway, with all our moves, our family has always had good homes to live in. Life has been good for us all, and I would not want to change any of it, even if I could. I’ve been able to spend the years with the best partner I could ever have wished for, while raising three of the best children in the world. And along came two South African doctors, and our family grew to five.

We have had a very rich, fulfilling life. We moved into Bridge Park Village in 2016. It is an amazing place, and we have made so many friends there.

He was pre-deceased by his parents, John and Agnes Warkentin, sister, and brother-in-law, Agnes and Henry Klassen, brother John Warkentin. Parents in law, Henry and Mary Friesen, Betty Friesen, Larry and Eveline Friesen.

The family would like to give heart felt thanks to the friends who walked beside us, the family who sat with us and the medical staff who attended Rudy for their tender support, care and mercies.

A memorial service will be held on Friday, December 9, 2022, at 11:00 a.m. at Steinbach Mennonite Church, 345 Loewen Blvd, Steinbach, MB R5G 0L1 . To join the family via livestream, please click HERE shortly before the start of the service.

In lieu of flowers, donations may be made to The Bethesda Foundation, Steinbach, MB.