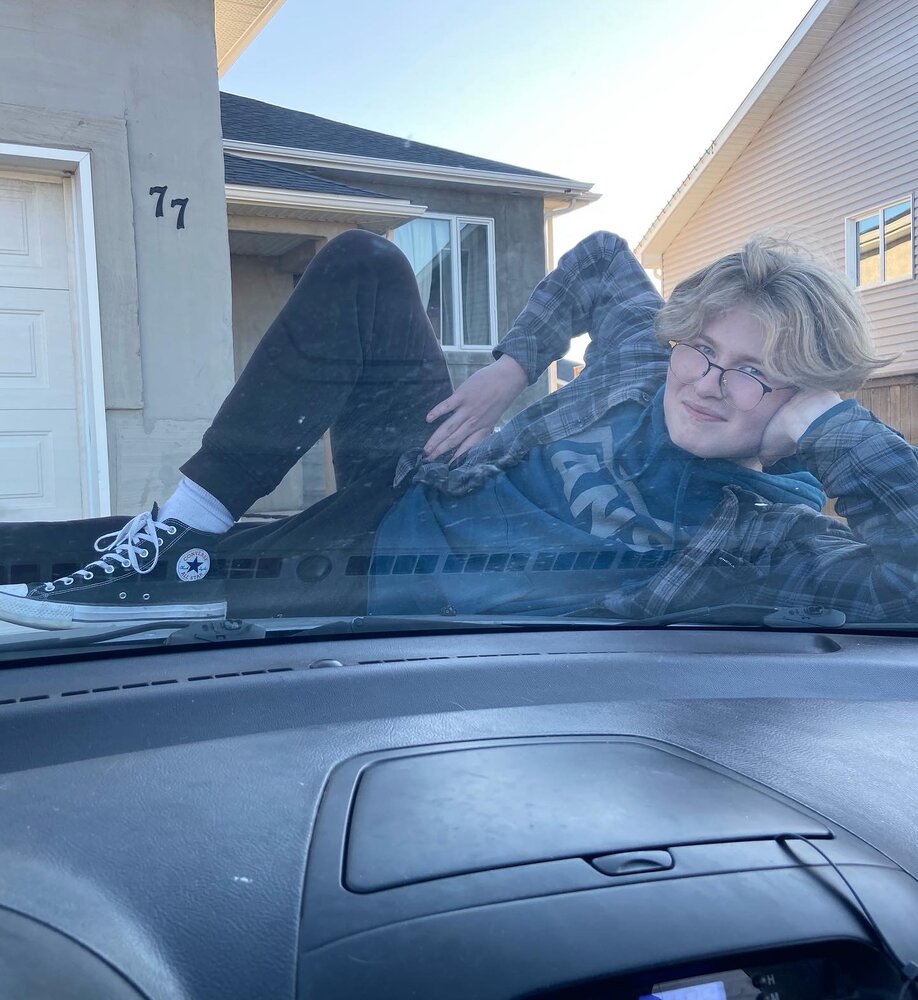 A Celebration of Life will be held on Wednesday, December 28th, 2022 at 2:00 p.m. at Southland Church, 190 PTH 52 W, Steinbach, MB. All are welcome to attend. To join the family via livestream, please click HERE shortly before the start of the service.

It is with broken hearts that we, the Fehr Family, announce the sudden passing of our son and brother, Ashton Ryan Lee Fehr. Ashton stormed the gates of heaven into the loving arms of his Heavenly Father on the evening of Wednesday, December 14th, 2022.

Ashton’s memory lives on in his parents, Jon and Bobbie-Lee; brothers, Noah and Tristen; sister, Hailee; great-grandmother, Helen “Nana” Friesen; paternal grandparents, Abe and Agatha Fehr; maternal grandmother, “Tammy” and husband Layton Hiebert; and maternal grandfather, “Todd” and late wife Judy Doerksen.  Ashton had many loving aunties and uncles and had a special relationship with his Auntie Mika, who would often steal Ashton away for nights at a time. He will be missed by his cat, Nyx!

Ash joins his Papa Jake Friesen and cousin, Mason Broesky, in heaven and is likely already causing mischief with them.

Ashton will be remembered for his infectious smile that filled a room the moment he stepped in. As a child, Ashton spread joy like sprinkles on the cookies that he always asked his mom to make for him and his friends. He filled a room with joy and literally could not stop moving. Ashton was a caretaker and looked for opportunities to help others, sometimes at his own expense. He cared deeply for his family and friends but put on a shy smile, so he looked cool. His mom remembers with fondness, a time when she was sick, and Ashton, at 3 years old, and his brother Noah, created a “get better” soup made with hot dogs, marshmallows, ketchup, mustard, syrup, BBQ sauce, milk, chocolate sauce, and more, served in the seat of a leather computer chair used as a bowl - and all she did was laugh.

Ashton was his father’s partner in crime - from chowing down on mini doughnuts, fishing, camping, or working in the shop. Jon will neither confirm nor deny a few nights of shenanigans with his boy, Ashton.  Sometimes questionable antics came into play, but even those are special treasured moments burned into his father’s heart. Some of these special moments included his Uncle Dan, cousins, Jessie and Dean, and family friend, Lorne Reimer. Ash was a boundary pusher, often at the expense of his parents’ sanity. For Ash, if you followed all the rules, you missed all the fun!  Ash LOVED getting a rise out of his mom, often spending hours waiting for just the right moment to insert his crude, inappropriate humor. His mom would do anything for one more moment like this. But amidst the chaos of life, Ash always found time to sit and rest. He would often spend hours curled up beside his mom in her bed and listen quietly to music or watch TikTok videos. He always knew he could count on her at any time, whether it was for a root beer float or a late-night drive to McDonalds with friends.  Ashton was an old soul. Like his father, Ashton liked cars, video games, snacks, and his guitar. He was always up for random adventures with his parents or friends.

Ash’s shenanigans will be particularly missed by his siblings. Hailee was often the target of Ashton’s many pranks, at times leaving her frustrated and running to her mom. Apparently dumping your ice cream cone on your sister’s head is funny!?  Alternately, Tristan would call Ashton protective and say he always put others before himself. Noah would describe Ashton as passionate.  At times he would watch with bewilderment as Ashton would “Totally freak out and wiggle around” when he was playing an action-packed video game.  His great-grandmother, “Nana” Friesen, would call Ashton a hugger and she always had to make sure she had a bowl of mints fully stocked before Ashton arrived. He was so young, but so grown up. Ash loved kids, specifically the ones who would be so gullible that they made easy targets for his cute little pranks.

Ashton’s friends would describe him as “All the moods at full volume” (Journey), “A better friend than anyone could be” (Ty), and “A kind-hearted kid who was there for everyone when they needed someone” (Karlee). In life, Ashton was often seen fighting injustice and sought to see and do the right thing.

Ashton, you were a fighter who was tired.  You shared your heart with others in moments of laughter and held them up in moments that mattered. You had so many burdens, but you always had room to carry someone else’s load. You never wanted someone to feel alone in their pain. Your fight is over. Now it is our turn to lighten your load, raise you up and carry you on in our hearts.

Psalm 3:5 I lie down and sleep, I wake up again, because the Lord takes care of me.

The family would like to thank the many friends and family that have gathered around them during this difficult time.

A Celebration of Life will be held on Wednesday, December 28th, 2022 at 2:00 p.m. at Southland Church, 190 PTH 52 W, Steinbach, MB. All are welcome to attend. To join the family via livestream, please click HERE shortly before the start of the service.

In lieu of flowers, donations may be made to help the family with funeral expenses and future needs by clicking HERE.