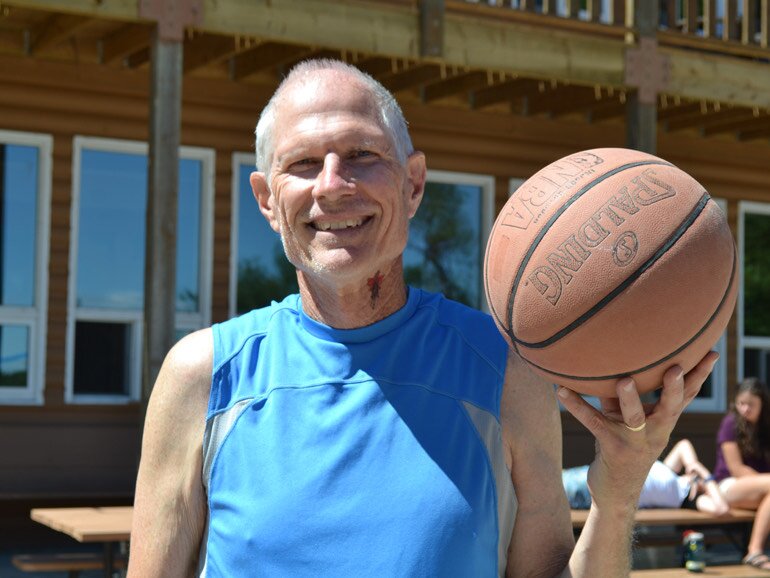 Kim Coursey passed away due to complications with Alzheimer’s disease on Thursday, October 28, 2021, at the age of 67. He was surrounded by his wife Rowena and their three children: Clarissa, Eric and Joel.

He is survived by his loving wife Rowena, his daughter Clarissa and her husband Gary and two children Logan and Lucas, his son Eric and his wife Krystal along with their four children Aidan, Quianna, Tyrus and Ella, as well as his son Joel and his wife Heidi and their daughter Joan. He is also survived by his two sisters and brother: Debbie, Lisa and Cameron along with their families.

In 1954, dad was born to Vic and Pat Coursey in Pomona, California. Dad had an older sister Debbie, and later became an older brother to Lisa and Cameron.  The family moved to Missouri when dad was in junior high.  He loved sports and played basketball and football in high school.  He loved to ride horse and he raised and showed Appaloosa's.  He had the opportunity to work alongside his dad, where he apprenticed as an electrician.  He also spent some time as a trucker among other odd jobs.

Dad went to Grace College of the Bible in Omaha, where he met mom.  They were married in 1975 in mom's hometown of Steinbach Manitoba. Their first 4-1/2 years were spent living in Missouri close to dad's family.  Dad's passion for youth was already evident as they worked as youth leaders at their little church near Versailles.  Dad and mom also ran a pastry shop while they lived in Versailles Missouri.  After they moved to Canada and to Red Rock Bible Camp, he would occasionally put those skills to use making doughnuts for all of the staff, which was always a treat.

When they moved, Dad attended full time at Winnipeg Bible College for one year, after which he was hired full time at Red Rock.  He continued his studies through distance education and completed them in 1995, graduating with a BA in Biblical Studies.

All who new dad would say that he did just that.  He had a saying “Throw your hat over the fence.”  I don't know if this was a true story, or just anecdotal, but it referred to coming to a pasture with and ornery bull.  You could take the long safe way around, or cut across the pasture.  Throwing your hat over the fence, meant you now had to cross that fence if you wanted to retrieve it.  That is how dad made decisions.  Once he had decided on something he went for it.

He loved the life that he and mom had made for themselves.  He loved his work at Red Rock and the connections that he was able to make through his nearly 40 years of service.  He enjoyed his time on the board of Christian Camping International, as well as his time on the ministry council at Emmanuel Evangelical Free Church, where they attended. Although he thoroughly enjoyed his work, it was the people that he met, and the lives that he was able to touch that he cherished the most.

Dad was always an early riser and you could find him most mornings spending time in the Scriptures.  On nice days at camp you would find him up on the balcony overlooking the lake just him and his Saviour.  His relationship with Christ was of upmost importance and he modelled that throughout his life to the many staff and campers that attended camp.

“Kim was not just a great boss and mentor, but a great friend.  His example and leadership shaped much of who I am.”

“Most meaningful to me, perhaps, was the sensitive, Spirit-filled way he led us in worship; I still sing some of the songs I heard first at Red Rock when God and I are alone; I will do so again in the days to come as a tribute to Kim.”

“He was a really big deal to me and without his steady, mature leadership I may not have learned the lessons I needed to learn.”

Dad loved sports and was always incredibly competitive.  If you wanted to know the score you just needed to ask him.  He spent countless hours playing basketball.  He played for Winnipeg Bible College (now Providence), and later on, he was a player coach at Steinbach Bible College.  He could often be found on the basketball court at Red Rock playing with staff and campers.  During the Winter, when they were in Steinbach, he would organize a weekly basketball game. Mom and dad enjoyed playing tennis and badminton together.  They spent many hours going for canoe rides out on the lake.  Dad liked to play beach volleyball and he loved waterskiing which he had already learned back in California.  He loved to windsurf and sail. When rock climbing began to take off at camp he bought himself a harness and climbing shoes.  When paintball became popular he enjoyed playing that as well.

Dad had a passion for hunting which he instilled in both myself and Joel, Clarissa not so much.  During the hunting season he would keep a deer journal, where and when he saw deer, what the conditions were like etc.  After a busy Summer at camp, hunting was a time of peaceful contemplation.  When I was old enough to hunt, he would take me out of school to go with him, and later on, when Joel was old enough, the three of us would hunt together.  Aidan was even able to join us his first year of hunting.  Dad always wanted us to shoot a deer, but his competitive nature would come out here as well.  One year there was a small buck that was closer to Joel, as Joel was waiting for a clean shot, well dad didn't wait.  About 10 minutes later, another large buck walked in on the three of us, and dad took that one as well.

Dad had a sense of humour.  When school groups would come out, he would take them on nature hikes.  He would talk about the different vegetation and wildlife. Clarissa and I would often tag along on these hikes.  He would tell the students how to recognize which animal had been there by the pile of poop that we came across. He would tell them, you have to feel it, to see how fresh it was, as he rolled it in his hands, and then sniffed it. Sometimes to confirm, he would taste it. It was only at the end of the hike, that he would tell them that he had planted Glosettes out on the trail ahead of time.

Dad always had time for his family.  He would read us Bible stories and helped with Bible memorization.  He read us the entire Tales of Narnia multiple times. He would make up Munchkin stories to keep us entertained on the long drives back to Missouri to visit family. He spent long hours coaching the different sports teams that Joel and I played on. He loved all of his grandchildren immensely and he adored mom.

He was gracious and caring even as the Alzheimer's took so much away from him.  I think one of the most difficult things for him was losing the ability to take care of mom and having that role reversed. The last thing that he said to me was “are you okay?”  This was a sentiment to all of us and he told us all how much he loved us.

Dad carried this note in his Bible.  “Live Life Fully”.  FULLY was an acronym for.

Uncompromising Integrity in Every Area of Life

Yield to and live in step with the Holy Spirit.

We love you dad and look forward to seeing you again someday!

Most will know Kim from his time at Red Rock Bible Camp and his love for children. In memory of Kim donations can be made to Red Rock (http://redrockbiblecamp.com) and Alzheimer’s Society of Manitoba (http://alzheimer.mb.ca).

There will be a small, private service for family held on Monday, November 1, 2021, at 1:30 p.m. at Birchwood Funeral Chapel, Steinbach, MB. To join the family via livestream please click the following link shortly before the time of the service. https://view.oneroomstreaming.com/authorise.php?k=1635577057145480.

Special thanks to his nurses and medical staff at Bethesda Regional Health Centre, Steinbach, MB.