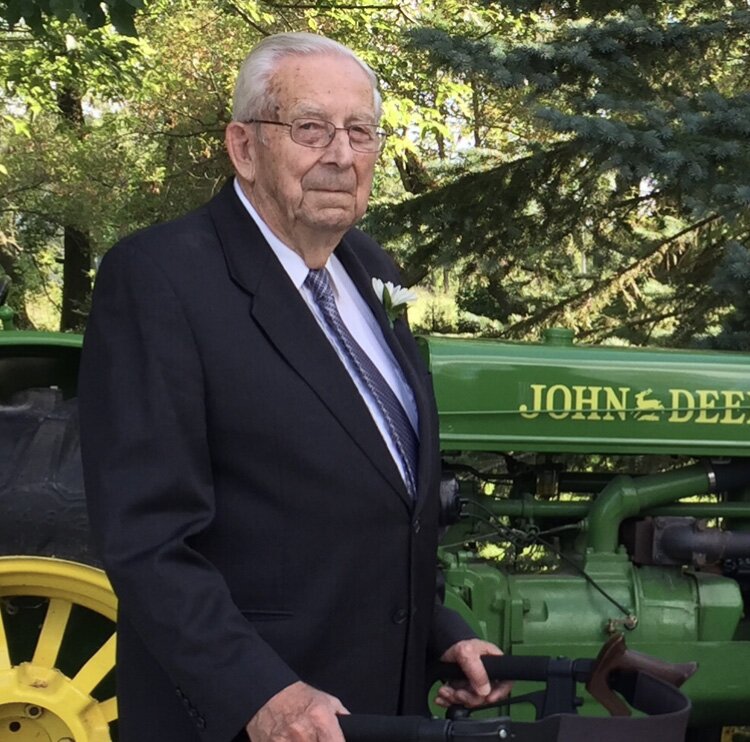 Edwin was born June 7 1920 on the farm in Prairie Rose (Linden) Manitoba to Peter T. and Louise Kroeker. He began his formal education at age 7 in the one room school next door to the family farm. The following year the family moved to Steinbach Manitoba to take care of his grandpa‘s farm. He ended his formal educational pursuit in 1934 at age 14 which he regretted later in life.

Although dad ended his formal school education at age 14 his father and the church community instilled in him faith and lifestyle values which he held to his entire life. Values that were constant in the home, community and business. Was he perfect? No. But he consistently sought to be faithful to God‘s Word.

In 1934 during the depression the family moved back to Prairie Rose (Linden). This was an eventful time for a 14 year old.

Dad loved working together with his father and learned many of the nuances of farming and life under his guidance. Besides the usual farm chores of taking care of livestock and field work dad found time to build a 16 x 40’ chicken barn. In his retirement when it was no longer useable he dismantled it. During the winter months he would do the morning chores and then walk a mile north clear brush with his axe till evening then walk home and do the evening milking.

Dad had a deep respect for the sanctity of all life. He strove to be a good steward of his family, land, animals and finances. Life wasn’t always easy or fair for him but he saw value in everyone and everything.

These values and his deep faith in Jesus were called into action when he was drafted for World War II in 1941. He chose to become a conscientious objector. The decision was not an easy one, but it was based on his belief in the sanctity of life and church teaching to respect authority including church, civilian and political, but only if what was being asked of him did not contravene the teachings of Jesus As a follower of Jesus he had no right to take the life of another person.

In 1938 he began dating Tina Giesbrecht the beauty living a mile south of his place. They were married in 1943 and had 70 years together. Dad took his wedding vows seriously. There were going to be good times and hard times but they were on this journey together whether it brought sickness or health, wealth or poverty.

Dad‘s life spanned a century of mind-boggling change. Imagine a lifetime where you go from oil lamps for light, no indoor plumbing, no Hydro or phone to all the amenities that we have and enjoy today. From walking or riding a horse and buggy for transportation to driving electric cars. From doing field work with horses to GPS technology in tractors. Lunar landings and communicating via face-time. These are a few things that happened during dad’s lifetime. The one constant through all these changes was his faith in God.

As dad‘s health deteriorated we took turns staying with him at Woodhaven Manor. The bonus of staying with him for the night was making and having breakfast with him. We would listen to him reading his Bible. Dad read the Bible Genesis through Revelation every year. And then to hear him pray. He would always thanked the Lord for all the amenities that we enjoy, safe places to live, warm homes, employment for family, health care and medicine clean water and food to eat. He prayed for the less fortunate and their well-being. And he always prayed for wisdom and guidance for church and political leaders. And he prayed for his family.

The circumstances of the last number of years weighed heavily on him. It saddened him to see all the fighting, and at times hate in society. It especially grieved him to see the divisiveness in the churches and and among Christians. He said there is always good. You have to choose to look for the good, because God is always good. He’s good even when life is not always easy or fair.

He was predeceased by his parents Peter T. and Louise Kroeker, Tina his wife of 70 years, three brothers, two sisters and two granddaughters.

Waiting to be reunited with him are his children Tim and Elsie Kroeker, Wayne and Marcia Kroeker, Lynne and Roy Hildebrand, Teri and Jake Bergen, 16 grand children 14 great grandchildren and one great great grandchild.

As a family we wish to thank his doctor and friend Wilfried Kaethler for the many years of care and dry humour he shared with Dad.

Thank you to the healthcare aides at Woodhaven. Your tender care allowed him more years of independence. He genuinely appreciate each one of you.

A special thank you to the entire staff at Maplewood Manor for the exceptional and compassionate care you provided for our dad during his short six months stay. You truly embody what it means to be the hands and feet of Jesus.

A come & go viewing for 25 people at a time will take place on Friday, January 7, 2022, from 7:00 p.m. to 9:00 p.m. at Birchwood Funeral Chapel, Steinbach, MB. Please line up in your vehicle on the west side of the building and a director will usher you in when it is safe to do so.

A private family livestreamed funeral service will take place on Saturday, January 8, 2022, at 10:00 a.m. at Birchwood Funeral Chapel, Steinbach, MB. To join the family via livestream please click HERE shortly before the time of the service.

In lieu of flowers, donations may be made to the Canadian Foodgrains Bank.