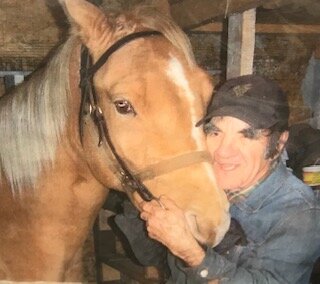 He is survived by his loving sister MaryAnne Sum (nee Watkinson) and his loving Palomino horse “Trinity” and his nephews Ted (Grace) Sum and Darryll (Michelle) Sum.

He was predeceased by his mother Anna Nickel and father Ben Watkinson and his very close aunts Mary Nickel and Nellie Nickel.

To put food on our table, Ben worked after school in the advertising industry bicycling to and from the north end to St Boniface.  He later worked as a projectionist in the Winnipeg movie theaters as well as a ticker tape photo finisher at the Assiniboia Downs Race Track.

Ben spent many enjoyable summers camping with his Mom and sister and brother-in-law in the Rocky Mountains and Lake of the Woods. His favourite hobby was collecting old Hollywood movies and posters.

In the last 20 years of his life, Ben most enjoyed his beloved Palomino horse, Trinity. Ben and Trinity spent many enjoyable summers with friends Lloyd and Cathy in Steinbach and winters with friends Sharon and John in Winnipeg.

A very special thank you to Dr. M. Ainslie, social worker Ashley Duke, as well as the 5-South staff at Grace Hospital for their loving care, making him comfortable during his very difficult last moments of life.

Due to COVID restrictions, a private family service will be held at the grave site in Heritage Cemetery, Steinbach, Manitoba.

In lieu of flowers, donations may be made to the Grace Hospital Founation, Winnipeg, MB. https://www.gracehospitalfoundation.ca/donate-now/