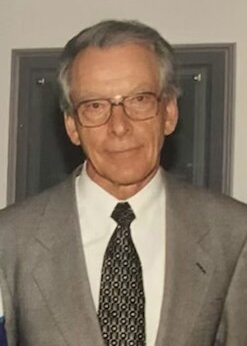 It is with great sadness that the family announces the passing of our father, Abe Loewen, aged 98 years of Steinbach, MB., on Tuesday, July 26, 2022, at Vita & District Health Centre, Vita, MB.

He was predeceased by his wife Laurie on May 25, 2021. He is lovingly remembered by his children, Reynold (Sandy) and Roger (Donna), grandchildren, Chad, Adam, Nicolas, Sydney, and Eric and great granddaughter, Emily. He will be greatly missed by all of his family and friends.

Abe was born on March 2, 1924, at Lowe Farm, Manitoba and joined a large family that eventually totaled 11 children. Dad’s scholastic journey in life started in a one room school in his hometown, and he continued his education at the country school in Rosenfeld, going from there to Steinbach for high school where he boarded with George Neufeld, Peter Dyck and Elbert Toews. After graduating he worked in Selkirk Mental Hospital for three years, and Dad later enrolled in normal school and became a school teacher going back to Lowe Farm to teach for two years. He then decided that he wanted to be a pharmacist and began that journey, graduating with his Bachelor of Science in Pharmacy in 1953. During his time in pharmacy school, he worked at Browns Drugstore in North Kildonan where he said he was the best milkshake maker. After graduation he and the love of his life Laurie opened their first pharmacy in Steinbach on Main Street. They later moved their pharmacy to Clearspring Village mall and then opened a second location in the Steinbach Family Medical Center location.

Abe and Laurie had their son Reynold in 1957 and then Roger in 1963 to make their family complete.

Dad was always up for any challenge and had a great thirst for knowledge. He and his family enjoyed going down hill skiing with his brother Jake and their family at the ski hill that they established in the Sandilands. He also loved to fly his plane, right from the day he got his license in 1962, with his greatest aviation adventure coming when Ken Leishman stole his plane during the Great Winnipeg Gold Heist of 1966. Dad was a founding member of the Steinbach Fly-In Golf Club, enjoying the sport into his final years. Many days you could find him cutting the grass at the airport after work. He also loved electronics, including his Ham radio which he would use to chat with people across the world and keep an eye on his numerous nieces and nephews. He kept up with technology and kept in touch with his extended family and friends texting on his cell phone or emailing on his Apple computer.

The outdoors was another great passion of Dad’s, taking his boat to St Malo regularly and taking who ever wanted to go skiing or fishing at Big Whiteshell. Camping in two feet of snow was also not out of the question.

Music played an important part in his life as well, first playing in the Mennonite Symphony, then later starting various groups to play at an assortment of functions kept him busy. Dad loved to teach and in the end, he was teaching various students how to play the cello. Church and his family were the corner stones of his life. If it was teaching Sunday school, or being a choir leader there was nothing that he would not do. After church we would jump in the plane and go to Winnipeg for lunch with who ever wanted to go. Family was so important to Dad, whether spending time with one of his 10 siblings or his numerous nieces and nephews. Going snowmobiling and all of his other activities were just a way of having family fun time.

Dad seemingly never got old – in his late 80s he was still working as a pharmacist, and was going skating with skates that him and Laurie used when they were dating.

Dad was the most caring and intelligent person, and he will be truly missed by those that knew him for even a moment.

As a family we would like to thank all those that looked after dad in the last few months, particularly the Doctors, Nurses, Health Care Aides, and other staff in Bethesda and Vita Hospitals