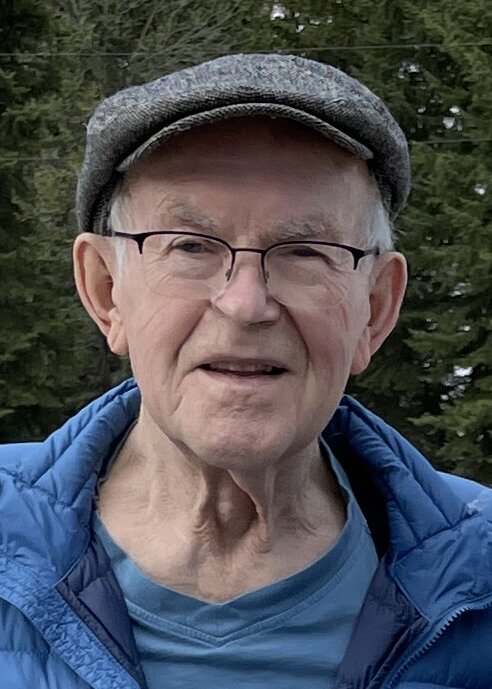 A Celebration of Life will be held on Friday, December 16th, 2022 at 11:00 a.m. at Birchwood Funeral Chapel in Steinbach, MB, with viewing prior to the service. Interment to follow at Hespeler Cemetery in Niverville, MB. To join the family via livestream, please click HERE shortly before the start of the service.

John Howard Enns at the age of 89 peacefully passed on into Heaven on Thursday, December 8th, 2022. Howard is survived by his loving wife Mary, daughter Heather Ruth Wiebe (John), son John Kenneth Enns (Julie) and daughter Rosemarie Dawn Friesen (Pete). 12 grandchildren and 30 great-grandchildren. Brothers Richard Enns (Lorraine) and Gerald Enns (Annette). He was predeceased by parent's John and Helen, Sister Viola, brothers Randy & Jim.
Howard was a kid at heart who loved seeing everyone have fun. Maria Wiens was that little girl down the street he kissed at five years old and became his sweetheart. They married on June 20,1953.
Howard worked as a mechanic with his dad and brothers at Enns Garage (est. 1939) General Motors dealership on Main Street Niverville. In the 60’s he purchased his own garage the former Case Tractor Dealership at 180 Main Street and named it Village Autobody. Throughout the years Howard mentored and taught welding, mechanics, and autobody to many. As many know he would always find a way to fix or creatively repair absolutely ANYTHING! Dad was a Volunteer for the Niverville Fire Department for 25 years and was Niverville’s first Fire Chief.
In the late 60’s he started a Ski-Doo Dealership which opened opportunity to get into the racing circuit for a time with his son John & daughter Heather. Dad loved camping, waterskiing, fishing, with family and hunting with his buddies in the big yellow Bus.  His love for the Lord brought him and Mary to appear on "Prayer Canada" a weekly Television program on cable TV for 15 years.
In 1998 He sold the property at 180 Main Street to his daughter Rose and husband Pete. During retirement he spent many hours working on the farm with his grandchildren & great-grandchildren. In 2005 while on vacation in Texas their home in Niverville was destroyed by fire. This was a huge blow for them as dad had built it with his own hands and they lost almost everything. They made the decision to sell the property and purchase a new condo which was a big change but ended up being a good decision.  Love of travel lead Mom & Dad to travel across US and Canada with their camper van. In 2013 at the age of 80 for their 60th wedding anniversary they drove to Los Angeles and went on a 14-day cruise to Hawaii!  Dad had a heart for people to know Jesus. Some of his favorite sayings were:                                      "I am Blessed & so are you" Do you have your ticket? (to heaven) Make sure you have fun “If it ain’t fun don’t do it!” Dad, you left us with so many memories, Love you Dad.
A Celebration of Life will be held on Friday, December 16th, 2022 at 11:00 a.m. at Birchwood Funeral Chapel in Steinbach, MB, with viewing prior to the service. Interment to follow at Hespeler Cemetery in Niverville, MB. To join the family via livestream, please click HERE shortly before the start of the service.

If friends so desire, donations can be made to the Niverville Fire Department at the Town of Niverville office.
Special thanks to the doctors, nurses and staff at Bethesda Regional Health Centre and De Salaberry District Health Centre. You all took time for dad, and we really appreciate your care & kindness. Thank you The family