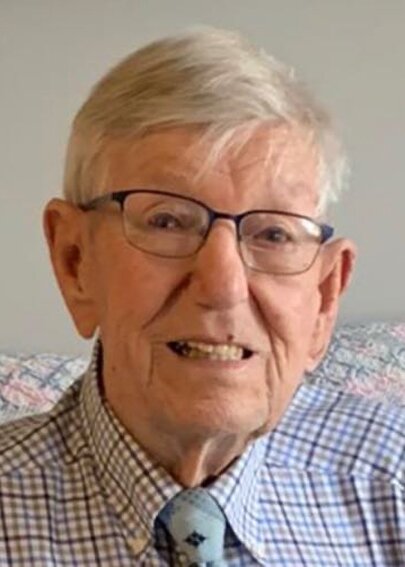 Viewing will take place on Friday, January 13, 2023, at 7:00 p.m. with devotional to follow at 7:30 p.m. at Birchwood Funeral Chapel, Steinbach, MB. To join the family via livestream, please click HERE shortly before the devotional begins.

The memorial service will be held on Saturday, January 14, 2023, at 11:00 a.m. at Heartland Community Church, Landmark, MB. A private burial will take place at Prairie Rose Cemetery prior to the service.

Arnold Reimer passed away peacefully into God’s presence at his residence in Steinbach, MB, on Saturday, January 7, 2023, with family at his side.

He was predeceased by his dear wife Annie, and daughter Marilyn.

Arnold was born on April 7, 1925, in Linden, Manitoba, where he lived most of his life. Dad had to grow up quickly as his father was hospitalized from the time dad was two until age 18 when his father passed away. The family moved in with Grandma’s bachelor brother, Karl Goertzen during the growing up years. This provided some stability both emotionally and financially. Dad spoke fondly of Uncle Karl, even though hard work was expected to make ends meet. All that changed when Uncle Karl got married, and Grandma and the two boys, Arnold and John, had to move out on their own. Dad remembered how angry and frustrated he was and how he cried out to God during this time. He determined in his heart that day that he would work hard to become independent.

Growing up, Dad was fortunate to have uncles in the Reimer and Goertzen families who took him under their wing. These relatives modeled hard work, personal integrity, and a deep, unwavering faith in God. Dad was baptized upon the confession of his faith by his grandfather, Henry R. Reimer in the Prairie Rose EM church.

Dad and Mom met working together at a small country store just south of Landmark. Their relationship blossomed quickly, and they were married in June 1949. Dad always said “he still could hardly believe Mom had said YES ”. Dad was not afraid to step out and push the boundaries. He courted and married our Mom, who was a member of a Mennonite Brethern church. Mom’s pastor had to marry them, but Grandfather Reimer welcomed Dad back into the church when Mom joined the EMC.

Dad’s passion for trucking became his focus . . . hauling logs for the Plett sawmill in the “bush”, hauling milk for local farmers to dairies in Winnipeg, driving Winnipeg Transit bus, hauling gravel, hay, beets, and moving missionaries around Manitoba and Saskatchewan, and driving long distance as an owner/operator for Reimer Express and Empire Freightways.

Dad was the ultimate entrepreneur. Business was in his blood. He was a visionary and was energized by the challenge of the project. Not all his business ventures were successful, but he showed resilience and was able to regroup and move on. The service station on Marion Street in St. Boniface was one such enterprise. In 1965 he bought a trucking company to operate for Federated Co-op and in 1966 established Merit Transport to operate for Macleods. These years were busy and fruitful, as dad built the businesses, sometimes with a partner or partners and later with his children. All of us have worked for him in the business at one time or another and were able to observe him in the business world. Dad was a man of personal integrity, his word could be depended on, and he expected the same from his employees. Dad had an incredible heart for anyone who was struggling and many times reached out a hand to help. Dad had high expectations of all his employees and encouraged problem solving and initiative on the job.

He was a visionary, not only in his business life but also in the community. Dad was instrumental in the completion of the first arena in town, he worked with partners (mostly Archie Plett) to develop lots in Landmark for the next generations to settle, he served as a school trustee for the area actively negotiating to keep Landmark Collegiate.

Dad supported the local church, the EMC conference, and a number of charities in many capacities throughout his life. In his retirement years, he became very involved on the Eden Foundation Board and Rio Grande Bible Institute Board. This led to involvement at Bibleville, a conference centre and RV park. Dad and Mom spent many enjoyable winters, pulling their 5th wheel to Texas and supporting the work of RGBI.

Dad and Mom began winter holidays when we were still all at home. He trusted all of us children to be responsible, taking care of each other and the home. They enjoyed great times with friends doing golf holidays in Phoenix or Florida. Golf was dad’s sport. His love of golf began as a stress release during the busy trucking company days. Several times a week, he would take off about noon and golf a round at Transcona Country Club. Then he’d be back for dispatch time and often work until 6:00 or 7:00 at night. Early morning golf was also a rite of passage during family camping trips. Young golfers were invited along to join the family golf event.

Travels took Dad and Mom to many countries in the world. He was able to visit his own relatives in South America; another time they traveled to Ukraine to the area where Mom’s parents had come from. Another trip that was especially meaningful was meeting Mom’s relatives who had left the former Soviet Union and were living in Germany.

Losing Mom after 70 years of marriage was devastating for Dad. Mom had kept everything running smoothly in the home, as well as being his constant companion in their retirement years. He continued to show incredible determination and independence these last years. He prayed for his family daily and began to share his own answers to prayer with us. Thank you Dad for the example of steadfast faith you were and how you modeled a life committed to faith, family, and community.

We wish to give special thank you and recognition to the caregivers from SilverLining Care who helped dad be as independent as possible. He was truly blessed by your service.

Viewing will take place on Friday, January 13, 2023, at 7:00 p.m. with devotional to follow at 7:30 p.m. at Birchwood Funeral Chapel, Steinbach, MB. To join the family via livestream, please click HERE shortly before the devotional begins.

The memorial service will be held on Saturday, January 14, 2023, at 11:00 a.m. at Heartland Community Church, Landmark, MB. A private burial will take place at Prairie Rose Cemetery prior to the service.